Copper-67 from Iotron Medical in collaboration with CIIC

Together we establish the world's first private sector producer and supplier of copper-67.  High quality radioisotope now available bi-weekly in support of radiopharmaceutical development.  Press Release outlining the full details of the collaboration available below.

We have now begun routine batch production of copper-67 on a bi-weekly basis.  Batches of 2-10 GBq are now available.  Contact us at sales@copper67.com for more details.  Product specification is available below. 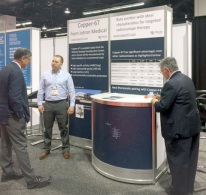 Iotron Medical are exhibiting at the Annual Meeting of the Society of Nuclear Medicine & Molecular Imaging, Anaheim Convention Centre, June 22-25 2019.  Come and meet the team and learn more about copper-67 at Stand SB4!

A review of the market opportunities for copper-67 has been completed by a 'focus group' comprising leading researchers and clinicians in the field of target radioisotope therapy.  This will be used to prioritize our commercialization efforts.

The National Isotope Development Centre announces that in 2019 the radioisotope copper-67 will be produced at Argonne in large batches of high specific activity for radiopharmaceutical develpment and testing.  Contact Iotron for further details.

A third patent extending the coverage of the Argonne copper-67 produiction technology has been granted by the US Patent Office.  The patents can be downloaded from here.

Iotron Medical are attending the European Association of Nuclear Mediciane meeting in Dusseldorf to meet with a number of researchers and clinicians in targeted radioisotope therapy to discuss opportunities for copper-67.

An equivalent patent protecting the copper-67 production technology has been granted in Japan.

The copper-67 production technology has been further protected by the grant of a European patent which will be validated in Germany, UK, France, Italy and Spain.

A second patent covering the Argonne copper-67 production technology has been granted by the US Patent Office.

The collabotrative project between Iotron and Argonne National Laboratory has completed the first production of copper-67 radioisotope on the newly refurbished and upgraded Argonne LEAF linac.

Iotron and the Argonne National Laboratory are pleased to announce the signing of a worldwide exclusive license agreement for Iotron to commercialize the patented Argonne copper-67 production technology.

Iotron and the Argonne National Laboratory have signed a formal agreement to work together on the development of technology to produce the medical radioisotope copper-67.  This technology uses a compact electron beam accelerator to make the radioisotope rather than a reactor or high energy proton machine.  It opens the possibility to make copper-67, long recognised as having ideal properties for the treatment of cancer, on a commercially sustainable basis for the very first time.

Argonne National Laboratory have successfully made the medical radioisotope copper-67 using an electron beam from the Rensselaer Polytechnic Institute in Troy, New York.  The irradiated target was shipped back to the Argonne Laboratory for analysis.

If you have any queries or wish to contact us: